This year is proving to be a really busy one for me. In January, we started this new blog, Take Five Authors, which has been huge fun. It’s great to be working with some really good authors on a shared venture. I also started writing for the Love a Happy Ending lifestyle magazine late in 2015, and that’s proving to be exciting and stimulating too. (You can read my recent article on staying in castles in Scotland here.) 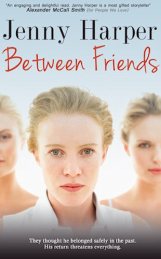 In February, my novel Between Friends was published. It’s about friendship and revenge, and it’s set in Edinburgh. I love the three main characters, Carrie, Marta and Jane, and all my readers are telling me that the villain, Tom, makes them squirm. I think that’s a good thing! I loved writing about Tom, he’s a true sociopath, he doesn’t care about other people at all.

As if all that hasn’t been enough, I have another book coming out in July. Mistakes We Make is the fifth novel in my Heartlands series, set in East Lothian, and it’s the first that takes up the story of one of the supporting characters in another novel (People We Love).

I’m off to Venice in a week (yippee!), but I am expecting to arrive back to the edits of Mistakes We Make – which is what has prompted me to produce this lovely Wordle (word cloud) made from the most frequently recurring words in the entire manuscript. I’m relieved to see that Molly has most prominence (my heroine), followed very closely by Adam (her ex husband), with Caitlyn the next biggest name. Caitlyn has a big role in the story.

The reason for creating a word cloud? Well, it’s partly just fun – you can play with the fonts and colours and layout – but it’s more than that. A word cloud can show you if you are overusing certain words. I used to use ‘little’ far too much, but this seems to have been conquered. At a recent workshop I was given a list of words you should delete. These included: really, very, that, just, then, totally, absolutely, literally, certainly, actually, basically, rather, quite, replied, asked, wonder, think, feel, realise, inhale, sigh, shrug, nod.

Looking at my word cloud, I see the word ‘think’. It’s on the large side, which means I’ve over used it, so that’s something I’ll be looking out for as I go through the edits. (Wonder if my editor will spot it?) I can see ‘felt’, though it’s quite small, and ‘quite’ (one of my weaknesses). Thankfully, ‘quite’ is minuscule, so perhaps I’ll get away with that one!

I like editing, so I’m looking forward to this. And I’ll certainly have my word cloud in front of me as I go through the text – the more bad guys I can delete, the more alive my writing will be!

12 thoughts on “Words clouds can be great tools for editing”