Jenny, Sue and I had a great time last week at the Romantic Novelists Association conference (see the previous post)… for me there was also a bit of work involved.

I have the honour (is that the right word – I’m not so sure) to be the RNA’s geek girl. My day job involves television and complex computer systems, and I am therefore member who looks after all things technology for the RNA.

I spent a lot of the weekend running around (well – actually hobbling around due to injured foot) making sure all the speakers were happily attached to projectors, computers and microphones. And I also gave a workshop on the technology of giving talks. 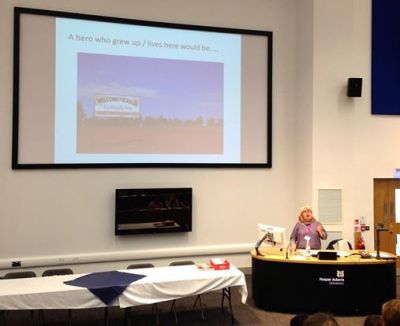 Here I am – with a very very big screen, giving a talk at a previous RNA conference.

Almost every author I know gives talks – to conferences, writing groups, educational institutions, the WI – and even on cruise ships. It’s part of the job description. I often get emails from panicking friends saying things like – I have to give this talk and they say they only have HDMI. What’s that? Can I plug my Mac into it?

Talks are scary enough without the technical terror, so I thought I should offer up some help.

If you want to connect your computer to a large screen TV or a projector, there are two primary ways to do this.

VGA is a 15 point plug that outputs only the screen display, usually to a projector. There is no audio. This is most commonly found in places like the WI.

A VGA cable and port. The other end of the cable is attached to the projector or sometimes a TV.

Sometimes your computer will automatically adjust itself and the image on your laptop screen will just appear on the big screen. If not, go into your Control Panel –> display and screen resolution to find the place where you tell it to detect another screen.

If you need audio when using a projector with VGA, you will need external speakers. I have a cheap pair of speakers I take with me. Some venues will have their own permanent speakers and a cable that you just plug in the same way you plug in your headphones. If you are including a video in your presentation, make sure you check the audio situation.

HDMI  is more recent technology and is used to connect to a big screen TV or a proper multi-media desk. It shares both sounds and the screen.

HDMI connections. The plug looks the same at both ends. This is for large screen TVs

Most new laptops no longer have VGA ports. They only have HDMI. You are going to need a converter to attach to an older projector. You can buy a HDMI to VGA adapter online or at any electronics/computer store for £10-20. Remember, if at any point you go through a VGA port, you will not have audio at the other end.

If you have a MAC – you won’t have either VGA or HDMI – so you will have to get a proper MAC to VGA or Mac to HDMI converter. These are easy to buy and work just fine.

A MAC to HDMI converter. There’s a similar one for VGA too.

The final piece of technology you need is what is known in the trade as a clicker thingy. These require a USB port on the laptop.

Most clickers also have a laser pointer included. The laser won’t work on most TV screens.

Using a remote clicker allows you to move away from the laptop, walk around as you talk and wave your arms around too. Try not to do what I did and wave your arms with such enthusiasm that you accidentally throw the clicker thingy into a wall and break it. Oops.

Ok – so that’s the technology – I hope that helps.

Over on my blog at www.janetgover.com, I am talking about the slide presentation itself and how to make it entertaining and interesting. It’s all about bouncing balls and honeycomb wipes. Do drop over for a look.

7 thoughts on “Taking the technical terror out of talks”