Secret Dumfries has now hit the book shelves – well, it’s certainly on Amazon because I checked earlier and they’d already sold all but one copy.

Photographer Keith Kirk and I have really enjoyed working on this book. It’s a book Doonhamers will love. A Doonhamer is a person born and bred in Dumfries, south west Scotland. The expression came about when people from Dumfries worked in the factories in Strathclyde during the war. At the weekend they would say they were going ‘doon hame’ (down home) and the name stuck.

Doonhamers – wherever they might now live – love their town and its history and the people who made it. Much has been written about Dumfries, its history, trades and markets and about the famous people – Robert Burns, J M Barrie for example – connected to the town. We wanted to unearth some of the lesser known aspects…

99p spent on Drunk Chickens and Burnt Macaroni will bring hours of reading pleasure as you journey through Afghanistan becoming caught up in the day-to-day lives of women like Sharifa, Latifa and Marzia, sharing their problems, dramas, the tears and the laughter: whether enjoying a good gossip over tea and fresh nan, dealing with a husband’s desertion or battling to save the life of a one-year-old opium addict. You can buy the book here.

The short excerpt below is from the journey and arrival at the clinic where I spent the following months establish a health volunteer programme with village women.

“The dramatic, rugged mountains of the Hi

ndu Kush formed a constantly changing backdrop – their kaleidoscopic colours varying from slate grey through earthy brown to rosy pink – as we travelled towards Bamiyan, the capital of Hazara Jat. This small, nondescript town and its surrounding areas, is steeped in history. Once, it was part of the ancient silk road, covering the route that led between Balkh and Tashkurghan, to Taxila, far away in Pakistan’s province of Punjab. Caravans laden with luxuries stopped to rest in Bamiyan’s fertile valley before continuing their arduous journeys.

We arrived at the clinic shortly before dusk

on the fourth day of travelling. … It was utter bliss to stretch out after dinner, glass of tea in hand, relishing the fact that I would not, at four o’clock next morning, have to clamber, bleary eyed, into my corner of the jeep for another bone shaking twelve hour journey. The prospect of being able to sleep for as long as I wanted next morning was wonderful. I had forgotten that two year olds have much more efficient recuperative powers, and next morning David, thoroughly refreshed and ready for action, woke at dawn. Excited about seeing cows and calves, sheep, goats and donkeys – all within reach – he couldn’t wait to be out exploring his new world.

Iqbal’s clinic was a small, dilapida

ted building on the edge of the village. The mud walls were a foot and a half thick, while the flat roof was constructed of straight, poplar tree trunks, interwoven with branches, topped by several layers of mud. The tiny windows were designed more for keeping out the bitter cold in winter, than for allowing in light. A large room where we gathered to eat, drink tea and entertain guests doubled as sleeping quarters for the staff – driver Abdul Ali, cook Ibrahim, field assistant Hassan, and Iqbal. 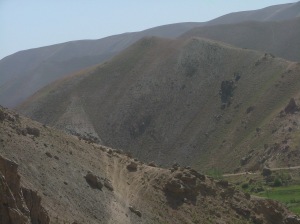 After a few days, I stopped reaching for a light switch when it grew dark, waiting instead for someone to light the pressure lamp, known as the gaz. To my shame, I never learned the knack of lighting these temperamental things and I was useless at keeping them alight when the pressure began to fall. If the light dimmed, furious pumping was required to raise the pressure, followed by some mysterious twiddling of a red knob. Whenever pushed, by necessity, to attempt any of this myself, I invariably plunged the room into darkness, or set the entire contraption alight.

In time, too, I remembered the pit latrine, a hundred yards from th

e clinic, had no flush. It had no door, either. A curtain made of old sackcloth – full of holes – suspended over the entrance gave only the illusion of privacy. The occupier was expected to cough loudly at the approach of another party.

When I was in occupation, no amount of coughing prevented women – who, amongst themselves, had none of the men’s sense of modesty – from joining me. Many a medical consultation was conducted while I squatted, flushed with embarrassment, over the hole.

‘Go and see Dr. Iqbal,’ I’d plead, but in vain. The women who followed me to the loo did so because they were too shy to mention gynaecological problems to a man. They would be clutching little packets of paracetamol, prescribed because, overcome by horror at discussing such personal matters, they had instead complained to Iqbal of headaches.”

And if you are wondering about those drunk chickens – well, you can find out by buying the book here.

Absolutely thrilled to find Donkey Boy & Other Stories is a finalist in Rosie Amber’s book awards for 2017.

I’m delighted to announce the paperback version of Donkey Boy & Other Stories is now available.

I had a launch event recently along with fellow author Lynn Otty who has also brought out her own collection of short stories called Having a Ball & Other Stories.

It was a lovely evening and great to see so many friends who came along to share in our celebrations with fizz and nibbles, a couple of short readings, lots of sales and a lot of chatter. Only, we forgot to take any photos apart from one Lynn’s son took before our guests arrived.

Donkey Boy has already started to collect some fabulous reviews on Amazon and on review sites such as this one, which had me dancing round my desk, on Linda’s Book Bag:
“With under 80 pages, Donkey Boy and Other Stories can fit into any reader’s busy life.

What a little gem this book is. There’s a super variety of stories packed with atmospheric and entertaining writing containing both pathos and humour. Mary Smith manages to convey clear and distinct voices for each of her brilliant characters, from a Pakistani boy to an elderly Scottish woman. What I liked so much about every one of them is at I felt I knew them instantly and understood them completely but without the author imposing her own judgement on them as they make their way through life.

I loved the unifying themes across each of the stories too. Whilst each story has its own unique identity, Mary Smith explores themes that encroach into all our lives, from poverty in third world countries, through domestic abuse to mental health, grief, fear, love and disability. She does so with skill and finesse, never preaching, but conveying a wonderful sense of humanity for the misrepresented, lost and lonely and for those living unconventionally or outside social norms. I enjoyed every single tale, but especially the last in the book, The Thing in Your Eye, with its slightly supernatural undercurrent as Molly sees ‘Nasties’ in strangers’ eyes. The opening story, Donkey Boy, set in Pakistan also made me think about my own behaviour as I shall be travelling to India next year and will obviously be tipping those I come into contact with.

I really appreciated Mary Smiths wonderful craft in creating a sense of place, time and person so that although these are brief stories, each has a completeness and there’s real satisfaction in reading them.

I found Donkey Boy and Other Stories a moving, engaging and beautifully written collection that has the ability to touch the reader, make them thankful for their own life and to make them think. I’m delighted to have read it.” 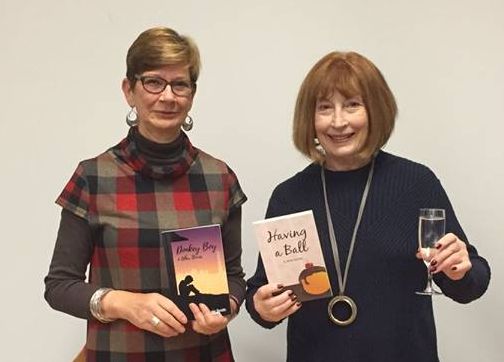 I’m delighted to announce the publication of my short story collection, Donkey Boy and Other Stories.

Over the last few years I’ve been focussing more on non-fiction titles so I’m particularly pleased to be returning to fiction with this slim collection of eclectic stories. Readers will meet a diverse range of characters in wide-ranging locations from Pakistan to Scotland.

It was with some trepidation I asked author Margaret Elphinstone to read the collection and, if she liked them, to write a couple of lines to use on the back of the book. When she emailed to say she’d decided to read the first couple of stories then found herself reading them all straight through I was very happy. I was even happier when she sent me this:

‘Whether we’re in urban Pakistan, an old-fashioned travelling circus in Scotland, or repressed suburban Britain, Mary Smith’s stories take the reader right to the heart of a situation. They focus on characters who are disinherited by mainstream cultures. Whether it’s the boy from Peshawar whose father can’t let him stay at school, the adopted child who is marginalised by an identity she can’t recognise, or a woman escaping from lethal oppression, these people have been forced to abandon a part of themselves. The take on this theme varies from first person narrative ironically revealing its own complacency, to an impersonal voice which takes us right to the heart of suffering. The final story is perhaps the most chilling: is the character suffering from all-too-acute perception of cruelty and brutality, or is she simply crazy? In these stories the reader’s position is always ambiguous: are we colluding with dispossession, or are we honestly able to listen?’ – Margaret Elphinstone, author of The Gathering Night

My thanks to Melissa Priddy of Creative Station for the fabulous cover design.

The ebook is available now on Amazon.

A paperback edition will be published soon – so watch this space if you prefer to read a real book.